I've made a few adjustments to the track arrangement on my model railroad First, I've removed the second engine servicing track to allow the scene to breathe some more. The removal of this track allows me to include an engine shed while leaving plenty of room for additional trackside details that would have been difficult to squeeze in before.

Additionally, I removed a short storage track on the opposite end of Sandpoint yard as it was too short to spot more than a single car and was all but useless on my layout.

These updates are a result of taking what I've created on virtual paper and laying it down on physical plywood.  I've found that no matter how careful I am when designing a track plan, the reality of turnout length and clearances ultimately requires that I trim back my original intentions. 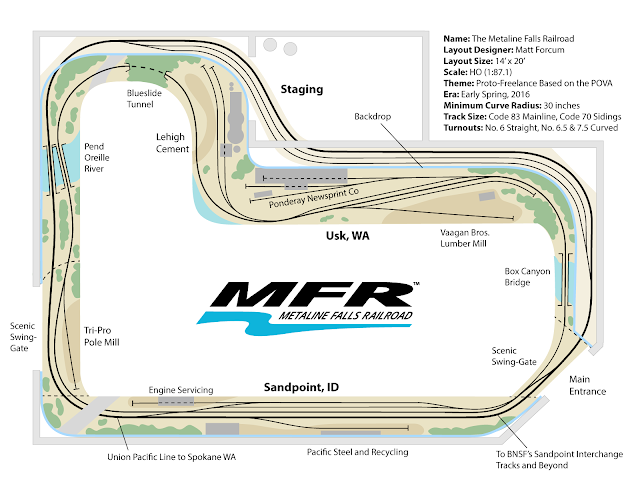 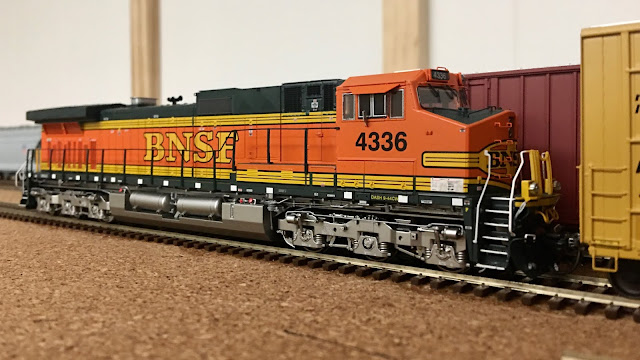 Scaletrains strikes again!  After falling in love with my Scaletrains SD40-2, I couldn't help myself and I ended up picking up this beautiful Dash 9 in BNSF's Heritage 2 paint scheme a few months back.  The locomotive runs and sounds great and is the LAST new locomotive that my layout requires at this point to have a full operation session.

The Heritage 2 paint scheme is my second favorite BNSF paint scheme.  What is my first favorite you may ask? Why, the infamous Vomit Bonnet of course!

I've held off from posting this for a bit, but it should be noted that the Ponderay Newsprint Company located in Usk Washington is permanently shutting down.  This closure is a huge blow to the surrounding community and to the POVA itself.

The Pend Oreille Public Utility District previously said the mill - which until recently used about 70% of the utility's electricity - had begun a period of "indefinite idling" after a two-week pause of operations.

The mill, which opened in late 1989, has supplied newsprint for publications in the Midwest, along the West Coast, and in Asia and South America. The plant is jointly owned by Lake Superior Forest Products, a subsidiary of Quebec-based Resolute Forest Products, and five major U.S. publishers, according to its website.

This closure will no doubt have major impacts on the railroad industry in the Pend Oreille valley as the mill was the railroad's largest customer. What will the future of the POVA be like?

Well, apparently the Kalispel Indian tribe is looking to purchase the Newsprint company in hopes of re-opening the mill according to the Spokesman-Review

Tribal vice chair Curt Holmes said the tribe had its chief financial officer review all the possibilities for the plant and its 900 acres, and the primary goal is to reopen the paper mill and restore the jobs that were so vital for the community’s survival.

“I live up on the reservation,” Holmes said. “It’s hard to find economic development opportunities that work up there. My dream is that my kids and other kids, if they choose to stay, can still have meaningful employment up there.”I've grown quite fond of the Pend Oreille Valley over the years as my research has given me a great deal of appreciation for the history, the industry, the people, and the beautiful landscape found in the area.

Whatever the future of the mill might be, it will always have a special place on my humble, little model railroad.
Posted by Matt Forcum at 11:07 AM 1 comment:

I was fortunate enough to be invited by "Big Bill" to join him on his live show to talk about model railroading and my current efforts in the hobby. It was a lot of fun to talk trains with others as I haven't had much of an opportunity to do so in the past.  I appreciate Bill bringing me on and hopefully I get more opportunities to talk about trains in the future as this layout progresses.

James McNab is a model railroader whom I've been following for quite some time now.  His work has been a HUGE inspiration for me as his previous layout was a marvel of design and execution and the progress on his new layout looks to be quite wonderful as well!


Model Railroader Magazine seems to think the same as well as he now has a new ongoing video series on the construction of his new layout. I am absolutely thrilled to see this and am looking forward to following his progress. 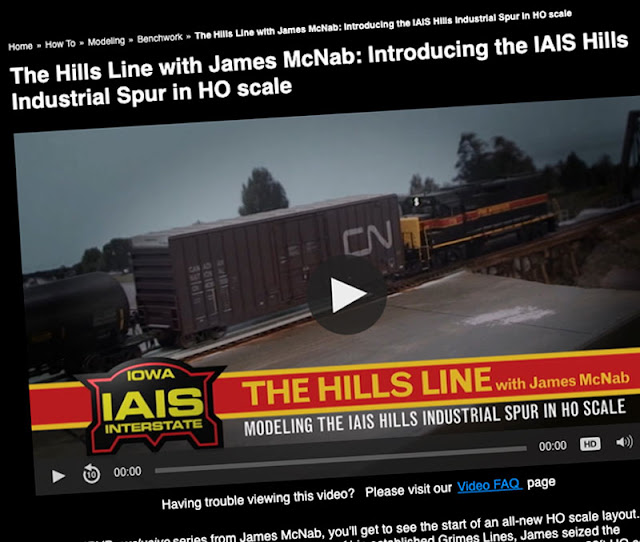 Posted by Matt Forcum at 6:41 AM No comments: 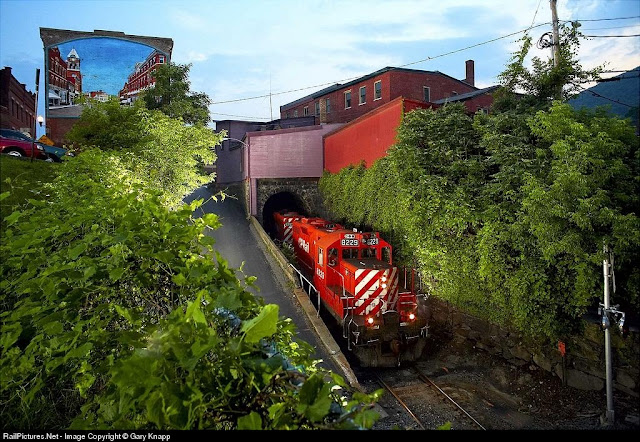 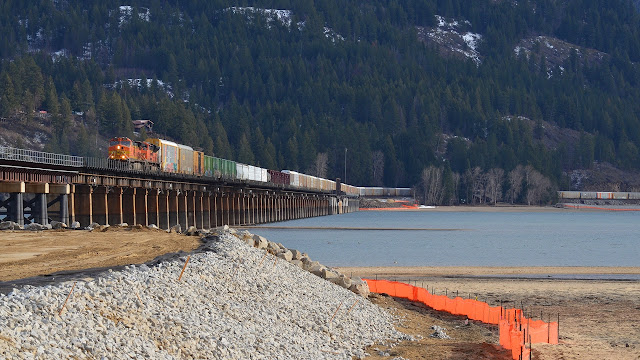 - Photo via Bruce Kelly
Looks like the BNSF Railway got their paperwork in order and have begun work on a second bridge crossing Lake Pend Oreille at Sandpoint.  This bridge will allow the railroad to relieve some of the congestion of trains having to wait their turn to cross the nearly mile-long span. Additionally, this new bridge should open up the opportunity for more rail traffic through Sandpoint while reducing delays for local motorists at grade crossings.
Posted by Matt Forcum at 6:52 AM 1 comment:

POVA on the Cover of a Magazine

A friend in the hobby pointed me to the February issue of Railfan & Railroad where the POVA is featured on the cover of the magazine!  The article itself is very cool and very informative. I learned a lot I did not know about the railroad's history. I also finally got a good, clear sense of day-to-day operations on the modern POVA railroad. This helped to confirm that my freelanced approach to this railroad is indeed prototypical and should serve to re-create the feeling of modern shortline railroading in the pacific northwest nicely.

I must say, it is a bit overwhelming to have such a surge of information arrive on my doorstep after spending years and years trying to slowly piece together the puzzle that is this railroad from various blog postings, pictures, google maps, etc. 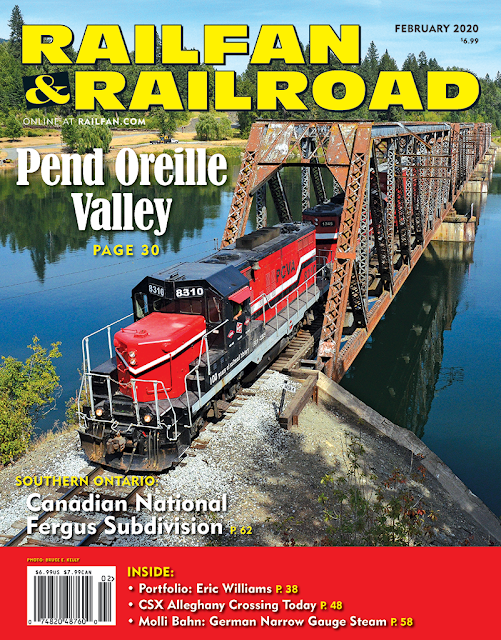 Posted by Matt Forcum at 7:34 AM No comments:

New Power on the MFR 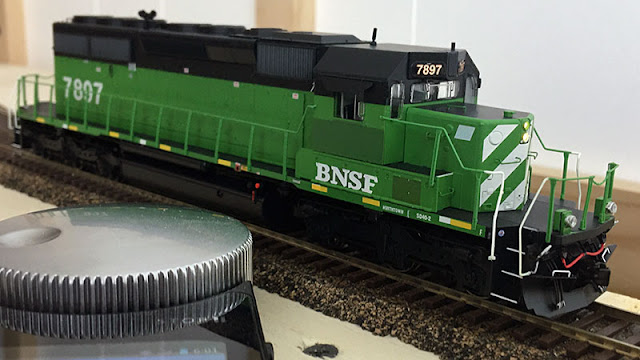 I really should endeavor to keep this blog more updated, but it seems that Youtube and Instagram are the go-to places for keeping in touch with the online community these days. (also facebook for some... not me, but... some.)

Back in July of last year, I pre-ordered this SD40-2 from Scaletrains.com. After a long and impatient wait, it arrived and I couldn't be happier.  The model is beautiful for sure, details are great and accurate, but the real surprise was how nice the NCE Loksound Decoder pair with a decent capacitor and speaker enclosure was. Not only does it sound absolutely incredible, but it runs extremely smoothly and reliably as well.  This has very quickly become my favorite locomotive on my layout.

This will now be the main workhorse on the MFR. It will stay painted in it's patched BNSF paint scheme for a while but eventually, it will be weathered and patched for the MFR along with some additional detailing including rear ditch lights.

I hope you like it as much as I do 'cause you'll be seeing a lot of this guy in the future for sure!
Posted by Matt Forcum at 12:36 PM No comments:

In this video, I talk about building simple and solid benchwork for your model railroad.
Posted by Matt Forcum at 5:00 AM No comments:


In this video, I discuss my resolutions for 2020 and share what I'd like to get done on my model railroad this year.
Posted by Matt Forcum at 10:04 AM No comments: