Look At Your Lighting

I mentioned in a recent post that I needed to address the lighting on the layout. I don't have a great great camera and the lighting was just not bright enough in the room to compensate for my lack of skill at taking quality pictures. And so I decided to replace that old light bulb hanging from the ceiling with something that might throw a bit more light on the layout. I ended up getting a cool looking track lighting fixture. 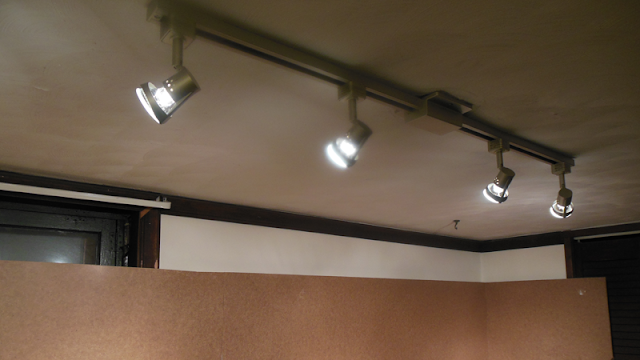 I chose this fixture because I have very low ceilings in the room and I was worried about clearance.  I also thought it might be helpful to be able to focus light on specific spots on the layout. Upon turning it on I immediately noticed that by focusing the light directly on the layout, the rest of the room appeared pretty dark in comparison. This does a good job of "framing" the layout and really giving it a dramatic appearance when viewing the layout in person.

So it seems to be an overall improvement but how does my camera like it? I set up a nice little side-by-side comparison test. 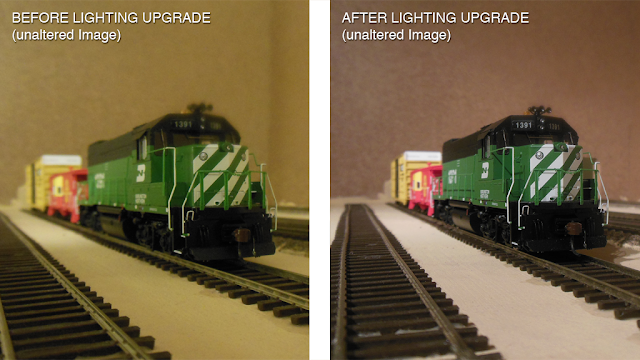 Immediately right out of the camera the picture is brighter and crisper. The photo is in better focus and the color is more accurate as well. With a little post processing, I think the image looks pretty good. (although the reds are WAAAAY off. I've gotta figure out how to compensate for that.) 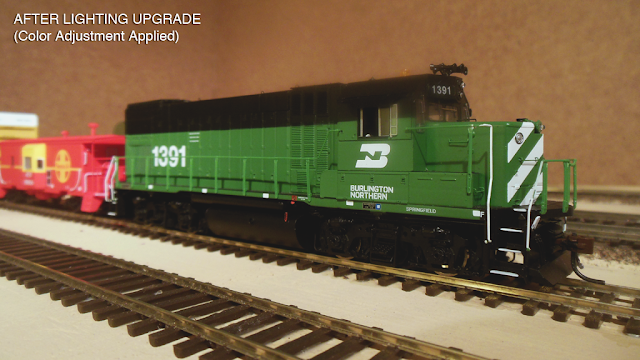 One major upside of the track lighting is that I can focus the light on key scenes, however one major downside is that it casts multiple shadows on the ground which is highly unrealistic. That may need to be addressed before it's over with.

I will continue to investigate ways of improving the lighting and improving my photography, but I gotta say, this is a pretty good start!