The MFTR is proud to announce the purchase of new motive power for our little railroad.  Former Burlington Northern GP15-1 #1391 (soon to be patched to reflect new ownership) can now be seen making daily runs between the towns of Newport and Ione.  This beautiful engine is just one of the many positive signs we've seen in recent months that things are continuing to look up for the MFTR and the economy of the Pend Oreille Valley as a whole! 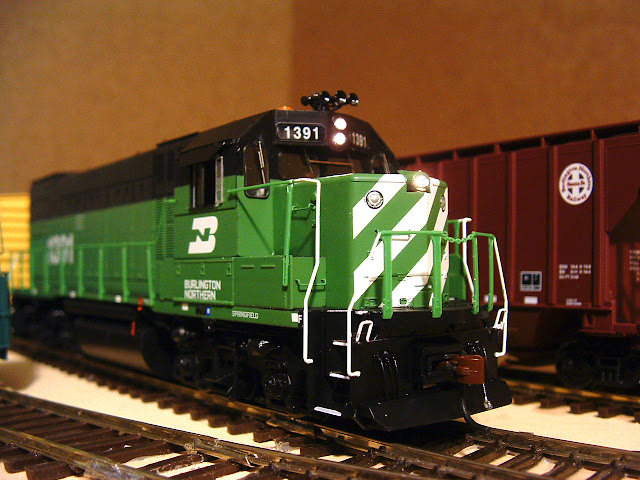 I originally didn't intend to purchase another loco in BN green, I wanted my little EMD MP15 to be the main motive power for the railroad with the idea being that the MFTR purchased it's locomotive from the BNSF at the time of the big BN and ATSF merger.  However, I also wanted a locomotive with sound capabilities and and beacon for added visual intrest.  After much research, I found that adding sound and lighting effects to the switcher would be darn near impossible.  There just isn't enough room under the hood to make it happen.  So, I instead purchased a DCC decoder specifically designed for Atlas's MP15 and played with that for a little bit until I decided that it was time to go looking for something new.
After scouring the web, I ran across the GP15-1 you see above.  Not only does it look absolutely beautiful and is full of fantastic detail, but it also came with a Tsunami sound decoder, flashing beacon, and a Mars light installed!  After running it a bit, I've gotta tell ya, sound and lighting truly brings a whole new dimension to the layout!
Before pressing the "buy now" button however, I decided to do a bit of research.  I knew basically nothing about this particular engine and I wanted to be sure that having a GP15-1 still working in the modern era still made sense.  Moreover, there were three different road numbers available to choose from and I wanted the one that seemed to fit best with my railroad.
I found that rebuilt GP15-1's are quite common on shortline railroads.  The Class 1's will often turn them over to leasing companies and they remain a popular choice for shortlines looking for a light-duty locomotive.  In real life, my little BN #1391 started as a Frisco unit before being acquired by BN.  After the BNSF merger, the locomotive was patched and re-lettered #1491. After a few years of service, BNSF turned the engine over to GMTX leasing company. From there the trail goes cold, but It's nice to know that the engine is still out there doing hard work for some small shortline.

Obviously the history of this unit has changed in the imaginary world I've created for my layout: The MFTR acquired #1391 shortly after the BNSF merger. Company management, being very fond of the BN Green scheme, decided to keep it as the primary color sceme of the MFTR.  There are plans however, to patch the engine with the MFTR's official logo. (Just as soon as the committee decides what it should look like.)
Posted by Matt at 7:44 PM 1 comment:

Beating Up on Track

One of the many benefits of a small model railroad is that you can more easily (and inexpensively) create a very highly detailed scene.  For example, the less track there is to lay, the more time you can spend making that track look great.

For my railroad, I decided to go with Walthers/Shinohara turnouts and Micro-Engineering Code 83 flextrack.  Both products are of a very high quality and both look great.  I carefully laid the track ensuring that everything was level and transitions between sections of rail were smooth.  This is particularly important for switching layouts as train speed is slow and cars are parked almost anywhere.  Having to deal with constant de-railing or a runaway car spotted on a small hill can be a major pain.

To enhance the look of the track and make it look old and worn, I used an Xacto knife to beat up the occasional tie and split tie ends here and there. For the yard and industrial sidings, I removed many of the ties and spaced the remaining ties further apart to help give it the impression of lighter rail and differentiate it from the mainline.

Next up, I'll be super-detailing the track by adding scale rail joints every 39 feet to better simulate the real thing.  It's been a lot of work so far, but it should be really great when complete! 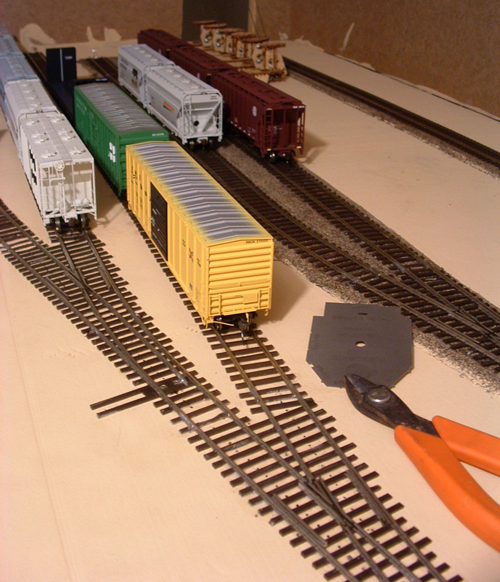 Great Reading on the Internet

First up is Lance Mindheiem's blog, and the blog for his company focused on the design and building of shelf layouts.  You may be familiar with Lance's contributions to Both Model Railroader magazine and the Model Railroad Hobbiest Magazine. Lance is a master modeler and designer and it shows in his extremely interesting and entertaining blog posts. These two sites will give you hours of reading enjoyment.

Next we have the legendary Carl Arendt's famous site dedicated to micro layouts. I can not tell you how many times I've read through this site completely.  The number of amazing railroads and ideas on display is staggering.  There are tons of pictures and illustrations to get your creative juices flowing.  Carl is passed on now, but he leaves a legacy that is probably most responsible for getting me back into the hobby.  Start with the Scrapbook section here.

Additionally,  there is the Micro Model Railroad Cartel.  This is a group of four micro modelers who are picking up where Carl left off.  These modelers are blogging their design and construction process as they work to build their own small model railroads.  Great information indeed.

Finally, there is the Bronx Terminal.  This blog is dedicated to the design and construction of a very unique model railroad based on an even more unique prototype. There hasn't been many updates in recent months on this layout, but the quality of design and construction here is top notch.  Best way to enjoy this site is to pour yourself a drink, get comfy in your favorite chair, and start at the beginning of the construction.

Know of any other great sites for someone interested in small layouts?  Reply in the comments section and let me know!
Posted by Matt at 8:29 AM No comments: