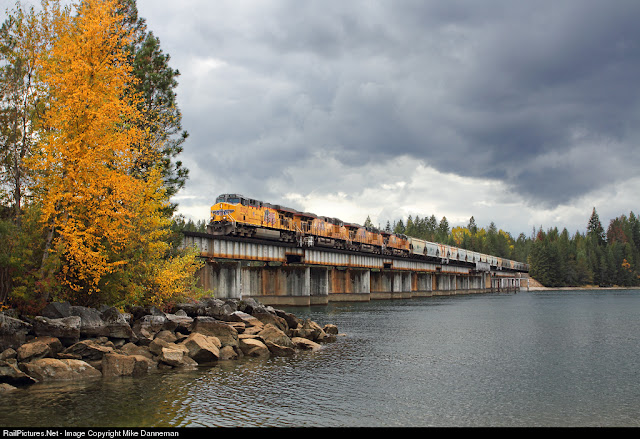 A Union Pacific train crosses the Pend Oreille River Bridge just west of Dover, Idaho
Posted by Matt Forcum at 6:53 AM No comments:

Just for kicks, I went on Google Maps the other day to check out the Pend Oreille Valley area where I'd be placing my proto-freelance line and was delighted to find that Google had updated their aerial views with new higher resolution photography.

This new photography made studying the paper mill in the town of Usk much easier and to my surprise, the trackage around the mill matches up with my current layout fairly well! 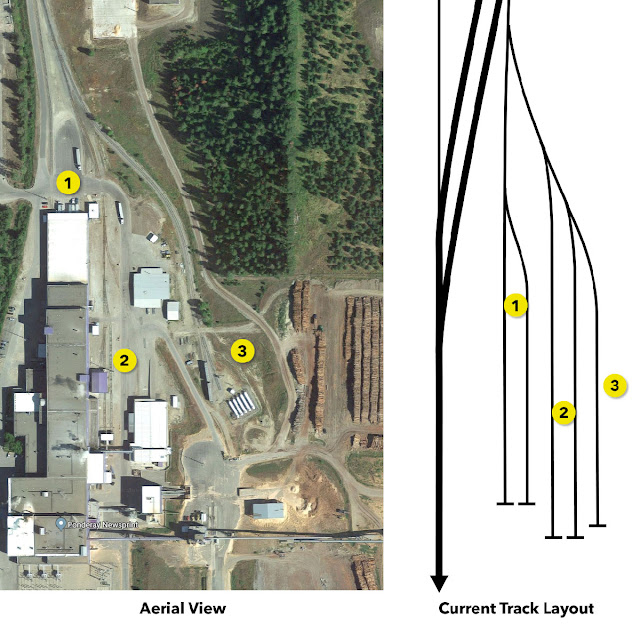 I sat there for a while considering the possibilities. Could I actually build a faithful representation of the paper mill? One which would allow me to operate it in a prototypical fashion? It didn't take me long to decide that this happy accident was just too good not to take advantage of.  I MUST model this mill.

With that decision made, a new problem arose.  Where do I put the cement plant, yard tracks and all the other industries that were originally crammed into that tiny little module? Looks like it is finally time to seriously consider expanding the layout!
Posted by Matt Forcum at 11:30 AM No comments: 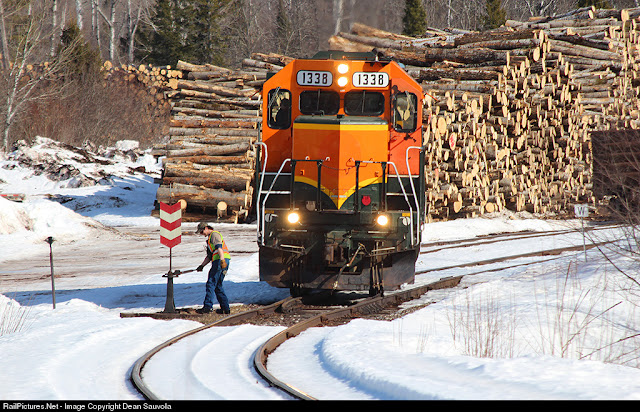 Working the pulpwood loading tracks on a warm February day.
Posted by Matt Forcum at 12:00 AM No comments: 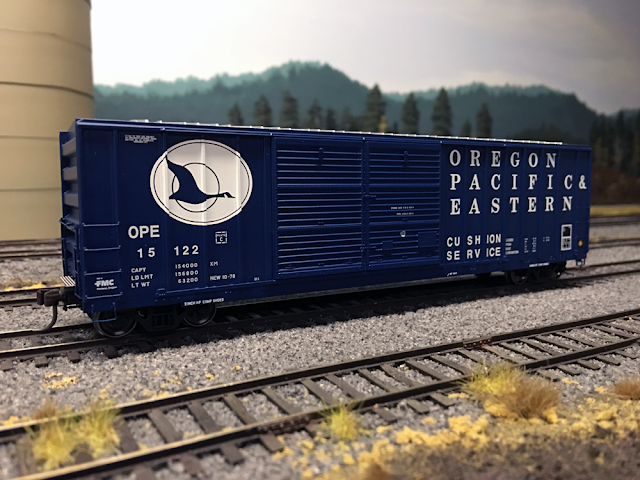 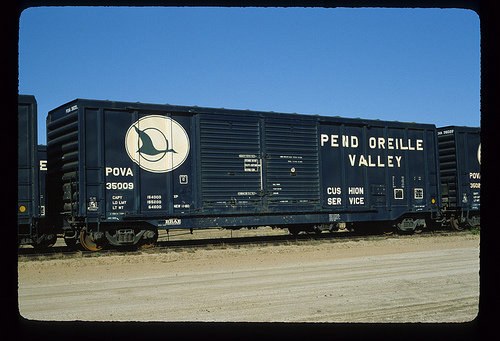 I arrived at the name "Metaline Falls Terminal Railroad" after much care and consideration. (as outlined in this blog post here.) You see, naming a model railroad is important to me because a name can evoke an image or feeling in the mind of the viewer.  For artists (and yes, all model railroaders are artists) These images, these feelings become integral to the model.  Just consider what wells up inside you when you hear names like: Gorre and Daphetid, Utah Belt, Grimes Line, and Downtown Spur.  These names not only describe a location, but also evoke a sense of the type of railroading the viewer can expect to experience.

And so, before laying one bit of track, I buckled down and worked to come up with a great name.  One that would be unique, yet memorable and would evoke a sense of a tiny short-line struggling to survive with few customers, isolated and tucked away deep in the mountains and forests of north eastern Washington; The Metaline Falls Terminal Railroad...

The word "Terminal"  Originally chosen because it "does well to both describe the type of railroad I'm modeling and evoke a sense of inevitability that seems to be so common with modern-era short lines" does NOT, infact mean what I THOUGHT it meant.  I thought "Terminal" meant "End of the line" "This railroad does not interchange with any other railroads besides the one." Nope. Not even close. Turns out "Terminal" means "Railroad that operates and interchanges cars at a railroad terminal."

So, I'm forced to change the name which also meant changing the blog URL which sucks because once you change the blogspot URL, anyone who has that original address saved will have no way of getting to your new one. It does not forward to your new URL nor does it inform the reader that the blog has moved and offers them a link to the new address.

This probably isn't as big a deal as I am making it out to be as I stopped blogging years ago really and whatever readership this thing once had has likely given up on me and moved on.  I also have not re-lettered any of my cars yet, so that saves some headaches and embarrassment there as well.

Anyway, lesson learned. Moving on.
Posted by Matt Forcum at 10:02 AM No comments: 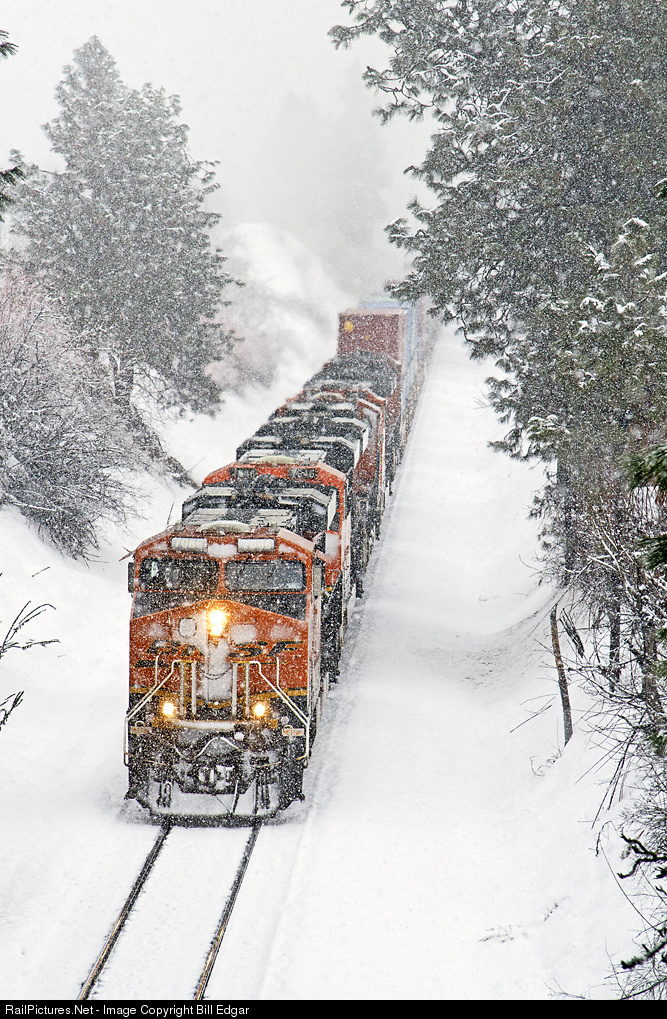 Blizzard conditions near Peshastin, Washington. Photo by Bill Edgar.
Posted by Matt Forcum at 12:05 AM No comments:

I've posted a new video on youtube discussing moving the model railroad to it's permanent location as well as expanding it a bit.

Posted by Matt Forcum at 5:22 AM No comments:

Over the years I've often read in model railroad magazines harrowing tales and wild adventures of moving model railroads from one basement to another.  Often these stories would speak of circular saws and crowbars and garbage cans full of broken plaster and ground foam. Usually the modeler would end their story with a solemn warning: "It's just not worth the effort."

I read these stories with interest and took their warnings to mean that if I were to try to move my own layout one day, I'd best be sure to plan for that move from the beginning.

The very first steps I took in designing my railroad was to measure doorways and stairwells.  My house was built in 1930 which means the stairwell was constructed in such a way that it essentially runs smack into a wall, thus making it impossible to carry anything larger than a basket of laundry up and down those stairs.  That being said, after careful measurement I was pretty sure that if I built this layout just right, I'd be able to squeeze short modular sections up those awkward stairs. 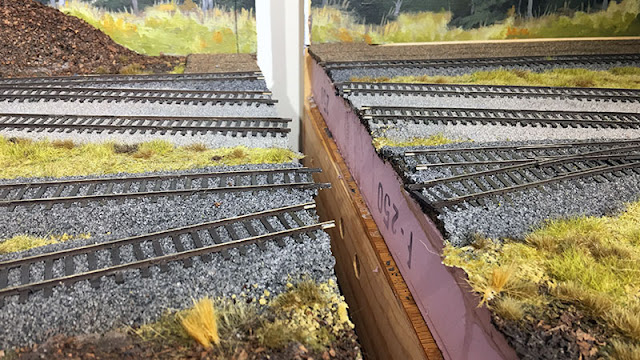 The layout is actually two 2 x 5 foot free-standing modules bolted together in the middle. The scenery, trackwork, backdrop, everything was designed and built with the plan of simply removing two large bolts and pulling the two modules apart for transport. For the most part, that element of the design worked well.  In the beginning I had assembled the trackwork carefully along that center seam using insulating joiners where the two modules met. I believe these gave the trackwork some flexibility which allowed the modules to "breath" at that joint over the years. It also allowed me to wiggle the two modules apart without causing damage to the trackwork itself.  Scenery had been applied to hide the seam between modules, but a quick swipe of an Xacto knife took care of that. Dealing with the ballast laid across the seam was simple as well. pouring a bit of water mixed with a drop or two of dish soap on the ballast was all that was needed to loosen it enough to allow it to come apart safely.

Having previously removed all models and trees and with the layout now in two sections, (and the staging yard and lead tracks removed from the surrounding walls) it was time to remove the legs... This is where my original plans fell quickly apart.

Originally I had planned to simply unscrew the legs from the tabletop and transport those separately which WOULD have worked except that I had added the fascia and bullfrog turnout control rods.  These rods were fished through holes drilled in the fascia as well as the leg supports.  In order to access the screws to remove the legs I'd need to carefully and delicately remove those control rods before removing the fascia and supports.  Folks, believe me when I tell you that installing those control rods and getting them to operate smoothly in the first place was a HUGE pain in the you-know-what. I was not about to try to carefully and delicately removing those rods only to have to re-install them again later.

So, out came the circular saw! 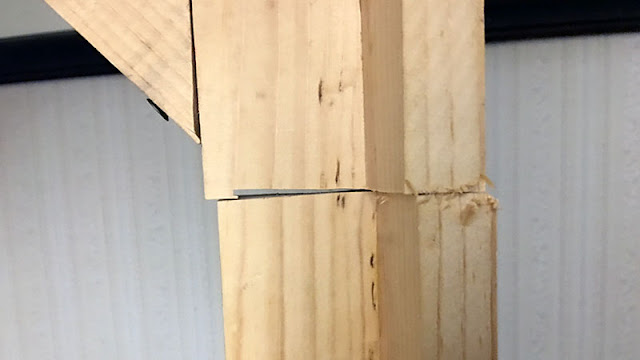 I cut through the each leg just below the supports and lifted the layout free. I found I also had to unscrew and remove the backdrop as well as it was now just a bit too tall with it's stubby little legs to clear the narrow stairwell. My poor little layout was now in 8 separate parts. 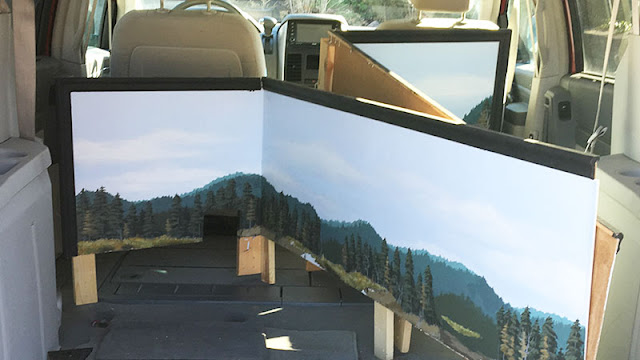 Transporting the disassembled layout to it's new home 30 minutes away in a borrowed van was very easy and took only two trips. I was careful not to jostle the pieces around much as I drove but that layout is built like a tank and suffered no damage along the way.

Once it arrived in it's new location I, with the help of my father, moved it into the basement. (which was a breeze thanks to more than 50 years of human progress on basement design) I then carefully re-attached the backdrop and re-attached the legs securing them in place using short lengths of 2x2 wood and a few drywall screws. 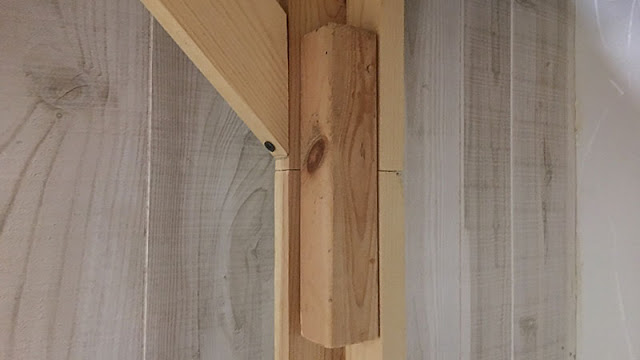 I've still got a bit of work ahead of me before I can run a train across the length of my layout again. I've got to level and re-align the modules and re-wire the bus line. I'll need to re-attach the lead track and find some way to snake the staging yard around a recess and a closet door. All of that will be addressed in due time. (I've got a 90-year-old house to sell first.) 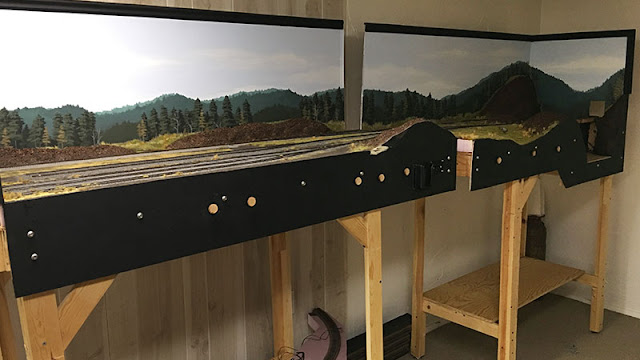 So in the end, how did moving a model railroad go? After years of planning and months of worrying, was it a success? Well, there were no garbage cans full of plaster and ground foam. No crowbars. There WAS a circular saw though and while I was sawing away at my precious layout and sawdust was flying, for the briefest of moments I thought to myself "It's just not worth the effort."

But that moment passed quickly enough...

...By the way, if you are interested in a wonderful little investment property in West Peoria, Illinois, boy have I got a deal for you!
Posted by Matt Forcum at 10:43 AM No comments: