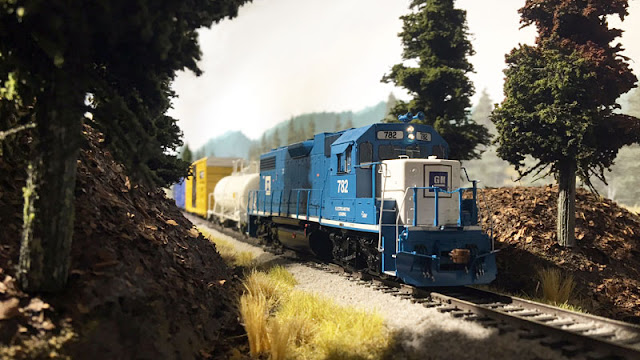 Posted by Matt Forcum at 2:33 PM No comments:

The Tedious Work of Ballasting

Just a quick update this week. I'm nearly done ballasting my track. I'm now on to that tedious step of cleaning all of the ballast off the top of the ties and off of the rails.

Ballasting is something that takes quite a bit of time for me.  I work at it very slowly ensuring that the application is neat and tidy. (but not too neat and tidy)  I've seen quite a few examples of model railroads who have, frankly, pretty poorly done ballast and it always seems to ruin the effect of realism for me. The problem appears to be that many people tend to rush through the process.  In my mind, trackwork is one of the most important and often most overlooked models on a layout and it's worth the time it takes to get it right.

I'll probably be doing a short tutorial video on preparing and ballasting track sometime in the future to show my technique. It's simple, but it works well for me. 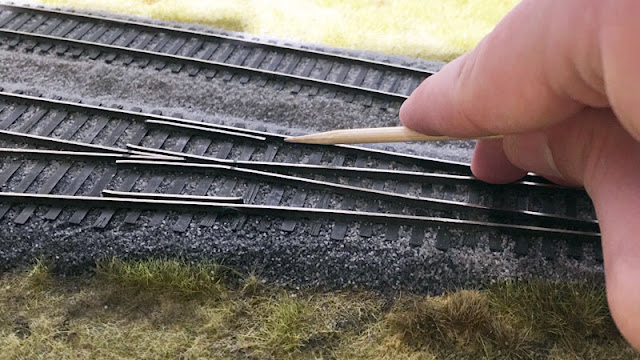 The Grass is always Greener...

I spent the weekend laying down grass on a large portion of the layout.  I wanted very nice looking grass and I knew that ground foam was not going to cut it, yet I did not want to spend a ton of money on an expensive static grass applicator. Luckily I discovered a product from Scenic Express called "TuftGRASS".  It is essentially a sheet of larger clumps of static grass affixed to a thin layer of silicone which can be cut and arranged on the layout as desired. I purchased the savannah grass and when it arrived I was surprised to find that it was much greener than expected. Seeing as how I was wanted a look of early, early spring just after the snow had thawed, I really didn't plan on using something that was so predominately green, but I laid it out on the layout and darn it if I didn't like the look! 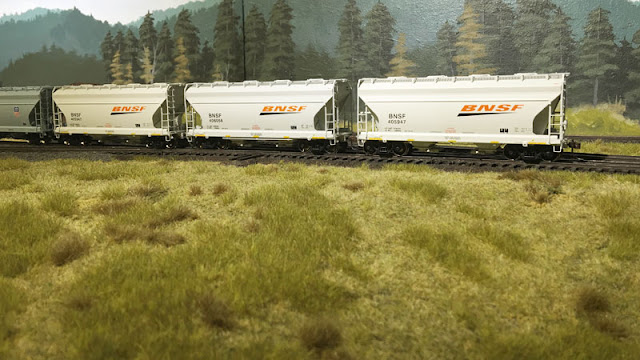 The secret to TuftGrass isn't actually the tufts themselves, but rather the short areas of lighter colored static grass that surround the tufts.  This stuff does a good job of representing dead (or mostly dead) grass from the previous season.(see bottom photo for more accurate representation of color) I tore the short pieces off the sheet and glued them to the layout in large irregular patches and filled in with the greener tufts to achieve the desired effect. Once that was done, I added brown tufts of silflor to break up the color a bit and hide some of the more visible seams.

The only real downside I see to this product is that at 13 bucks a sheet, it is affordable for a small layout, but anything larger and it gets pricey quick.  You'd probably be better off just bitting the bullet and picking up a static grass applicator at that point.

I'll be adding more variety of grasses in the coming days, but this is a pretty good start! 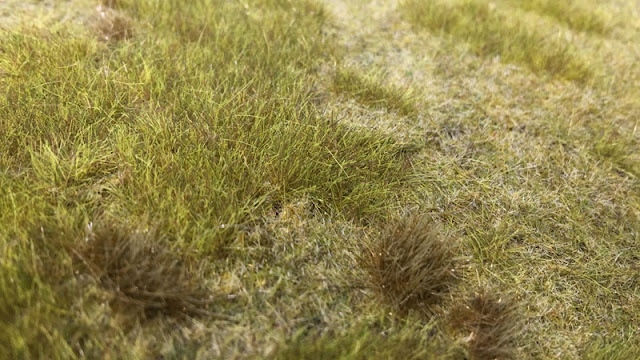 Posted by Matt Forcum at 7:56 AM No comments:

Problem #1  The Tsunami board in the model did not match the supplied directions.  I had to do a bunch of searching on the web to finally track down the board model number so I can figure out where to attach the wires. Turns out the board is a TSU GN-1000. This webpage provides an illustration of where the wires need to be soldered: http://www.members.optusnet.com.au/mainnorth/alive.htm

Problem #2 I can't solder apparently. I didn't have an issue soldering track work, but for some reason I could not get the wires to solder to the board at all.  Took me many tries to get it to finally adheir. I tested it on the layout before I attempted to reattach the body and everything worked perfectly! However...

Problem #3 The locomotive comes equipped with headlights, a Mars light and a beacon as well.  These are really cool, but they also mean that there is a mess of wires that won't allow the shell to fit correctly once the CurrentKeeper is installed.  I tried it maybe a half a dozen different ways but no dice.  There is just not enough vertical clearance in the body to make it happen for me.  If I was diligent I could probably re-arrange the wires in such a way that there is enough clearance if not for my last problem...

Problem #4  The screw to the coupler box is stripped and I can't open up the locomotive now.  That's right. When I purchased the locomotive "new" from the online retailer, it came with a partially stripped screw in the coupler box. (along with a handrail that had been broken and glued back into place, but that is a different story) Anyway, that was annoying, but with the right screwdriver and a light touch, I had been able to work around it up to this point. However, last night with the constant assembling, disassembling, rearranging the wires, assembling again, seeing that the body still doesn't quite fit as it should, disassembling again, etc, the screw finally gave up and stripped away completely.

So now I have this locomotive that I can't do anything with. I can't get the body off the frame, I can't close it up completely.  I'm VERY frustrated right now.

By the way, after I ruined my GP15, I installed the second CurrentKeeper in my GP38-2. It went in just fine. No problems at all. Figures.

So, not all is lost.  Truth is I secretly hated that GP15 as it has given me nothing but problems from day 1. Part of me is glad it is gone from my layout. I also think I can spin this into part of the "lore" of the railroad. Something like:

A catastrophic engine failure has placed MFTRs GP15-1 out of commission for the foreseeable future. This comes at a fortuitous time however, as the railroad has seen a decline in rail traffic the past several years. Trains in the Pend Oreille Valley have become shorter in length and less frequent. The extra pulling power has proven to be less economical than beneficial. The crippled GP15-1 now sits at the rail shop in Sandpoint Idaho awaiting it's ultimate fate. 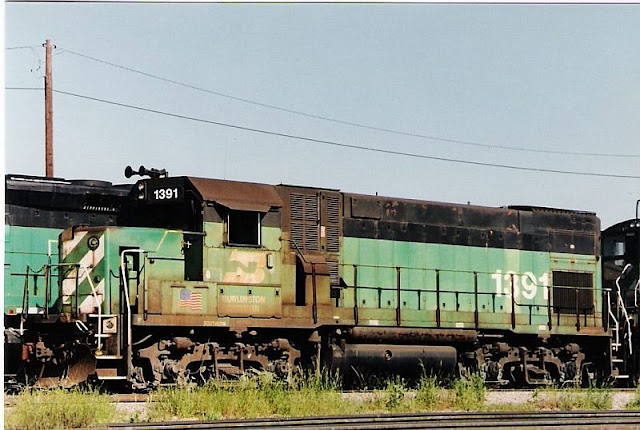 Everybody's Working Through the Weekend

Sorry for the title, but sometimes I can't help but love a bad pun.  Anyway,  PROGRESS!

I made a lot of great progress on my layout over the weekend. As I mentioned before, I wanted to get all of the exposed pink and floral foam covered in an initial base coat of scenery and I was able to get that accomplished!

I began by placing a couple of smaller N scale woodland scenics culverts where I wanted them to go. I had to go do some additional carving into the foam to make room as they weren't originally part of the plan for this location. I secured them in place using Mike Confalone's "Universal Mud" technique and shaped the hillside around them appropriately. 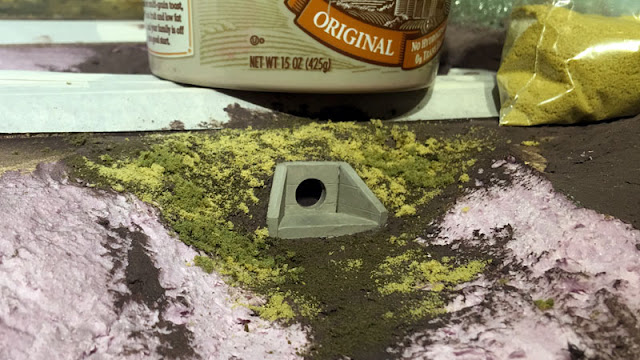 I then painted the surrounding area with dark brown latex paint and spread on ground foam while the paint was still wet.  Later, I secured the ground foam with diluted white glue.

Once that was accomplished, I turned my attention to the hillsides. These will eventually be covered in a variety of deciduous and conifer trees so I wanted to create the look of a forrest floor. Again, I borrowed a technique from Mike Confalone using dried leaves shredded and "pulped" in a blender to create the forrest floor. 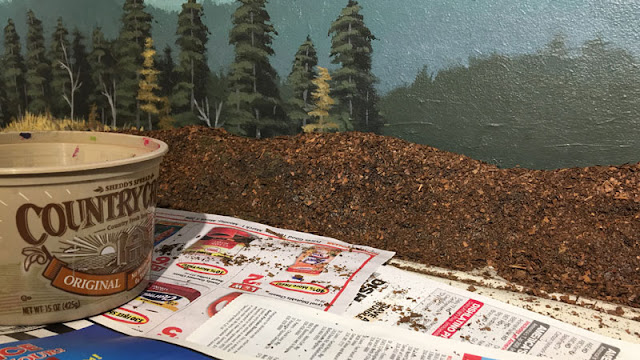 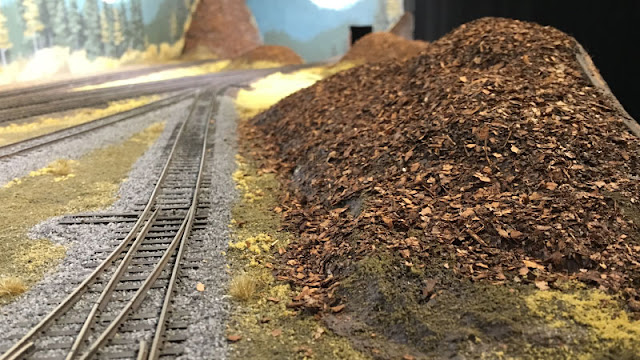 I am extremely pleased with the results of this technique.  The look of the forrest floor is very convincing. (though honestly the leaf cover is quite oversized for HO scale) I'm considering adding a light misting of an appropriately colored ground foam over the leaves to try to add finer texture to some of the larger leafy chunks. Your thoughts or suggestions on this are welcome.

Overall I am extremely happy with the results!  Though far from finished, it is really good to get a base coat of scenery applied to the entire layout. Doing so was a kind of strange cathartic experience for me. It gives the railroad a certain degree of polish that wasn't present before. Now as I look at my railroad I feel much more relaxed and positive about the work ahead!
Posted by Matt Forcum at 9:38 AM 2 comments:

The End of the Steamboat Era

I love discovering old photographs that shed light on the history and people of the area I'm modeling! The image below features a steamboat navigating the waters of Box Canyon near Ione.  The narrow portion of the canyon in the background is where the future Box Canyon Bridge will be built when the railroad eventually comes to the area. 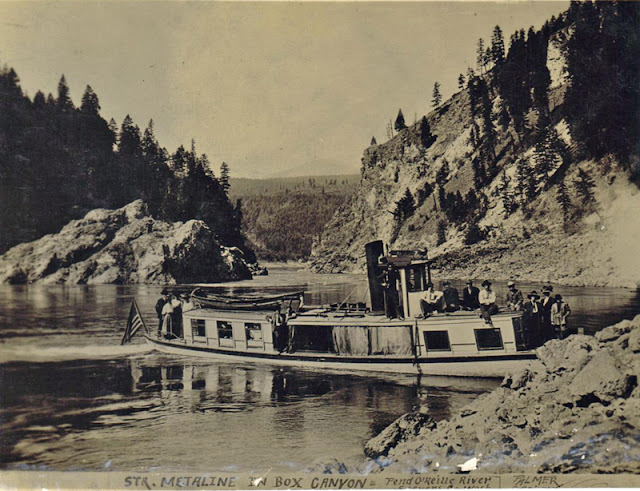 Below is the same boat heading south through the canyon returning from a trip to Metaline Falls. This photo really shows how treacherous the rapids could be! Later a dam will be built at the location of the photograph. That, along with the railroad rendered the steamboat a thing of the past. 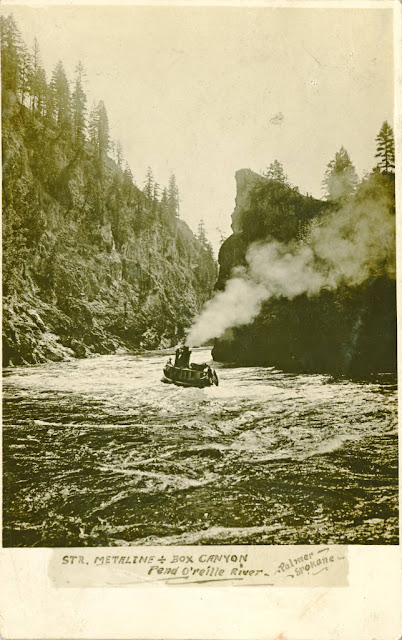 An article about the end of the steamboat era read:  "old timers along the river welcomed the coming of the railroad, but many of them remember with pleasure the romantic days of the river boats. Many a big poker game and carousal were staged on [the last steamboat] in the days of her glory, and many well-known characters held the wheel and rode in her cabins."

Here is a link to more info on the subject.

Posted by Matt Forcum at 2:32 PM No comments: